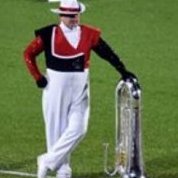 Now I have to be careful here, because I am a Kidsgrove alumnus and I am marching next year... this is MY opinion only and I do NOT speak for the organisation... but.... Is the contest not called the

For my two cents (if my opinion is actually worth that much), I just hope that no corps participant )be they performers, administrators, designers, or teaching staff) ever think about "if so-and-so is

Great job C2 and the two members of the band I teach!