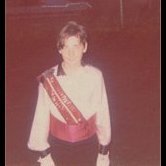 In the late '70s I was in a community marching band and we were shown this video of Phantom '75.  Back then technology was on the forefront of cartridge video tape (the machine was the size of a '70s

The tick era had interesting outcomes at times.

I think the Bayonne opportunity and his NJ roots may have been a draw to go  back East.