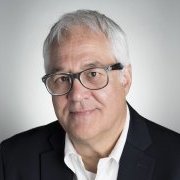 Haven't paid attention to the music or show teasers. When I see them in Detroit, it will be (mostly) all new and surprising. Same for others, too. But Cavies are my favorite year end and out. Others c