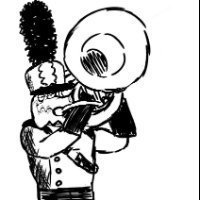 By SaturdayNightLights,
May 22 in DCI World Class Corps Discussions

I feel like the designers don't really know what made 2018 so popular or effective, and are just trying to blindly recreate that success without truly understanding how to make that happen. The music

He posted his opinion.  As is often the case in life, people on DCP have opinions we sometimes don't agree with.

their brass are amazing this year.  already with a rich ensemble sound with a very challenging book for me, "edge" comes from playing great source material as well as it can possibly be played, and th