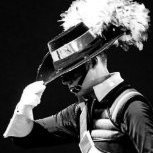 I like your ideas. Don't be afraid to put ideas out there. This allows for good conversation.  I agree with you that perhaps more DOME shows could be a good thing. It's not good for sound, but ve

I love seeing someone with a better handle on this idea take it and start spinning it into something that might actually be viable. I may just have "DCI colored glasses" on...but I believe the activit