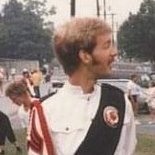 Keep JD Shaw! The Regiment sound returned this year and it was nice to hear. And keep Bob Smith to clean the drill.

PR had camp this weekend. Lots of friends who are super excited about the season. I know they got show music and worked on it as a brass section. Lots of great things from my friends at Phantom a

making sure he never leaves again should be priority 1