The tone here tonight is really bad. All these members work so hard and frankly all these corps are incredible, it's too bad some folks can't find it in themselves to see positives

GH would be SO disappointed in the condition of the yardlines and hash marks after Crown's show. 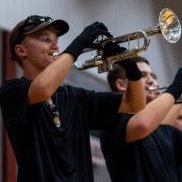 I was literally bawling while leaving the field. It was a very emotional experience for me. I left everything on the field. We also sang Legends at the housing site after the show and I was in tears.